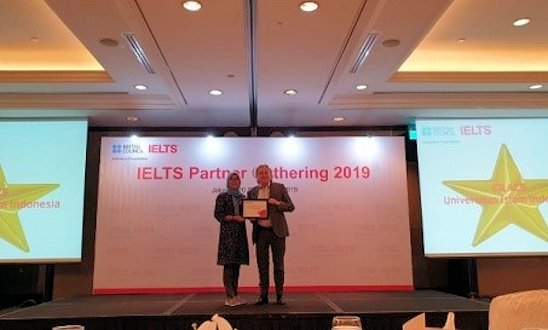 As a reputable foreign language teaching institution, Cilacs UII has once again earned an acknowledgement. At IELTS Partner Annual Gathering 2019 held by British Council (BC), Cilacs UII received a Certificate of Appreciation for achieving significant number of IELTS test-takers from 2018 to 2019. This event took place on Friday (20/9) at Shangri-La Hotel Jakarta. In addition to the award, British Council also delivered the most recent news on education in the United Kingdom in this ceremony.

Representing Cilacs UII is Suprihatin as the Head of Academic Department who received the Bronze Certificate award from British Council. It is widely known that Cilacs UII has become one of British Council’s official partners in Indonesia, specifically as Official IELTS Registration Center.

The event was commenced as Mr. Paul Smith, the Director of British Council Indonesia, addressed an opening speech. He expressed his gratitude for the support from partners all over Indonesia that has promoted and become British Council’s agent in conducting IELTS tests.

British Council (BC) is a UK-based international organization that promotes cultural relations and provides information for education opportunity. IELTS Partner Annual Gathering 2019 is BC’s yearly agenda that aims at appreciating partner’s cooperation from the entire country.

Also attending the event is Mr. Kishore Roy, the Regional Exams Manager South East Asia 2 and also Farida Limbong, Senior Examination Business Development Manager. They both expressed their highest appreciation for the support of partners all over Indonesia for the performance of IELTS tests in 2019. In the near future, considering the current profile of IELTS test-takers in Indonesia, the implementation of IELTS’s Computer Delivered Test will become a priority program for British Council. (Ank/Tin)