Prof. Is Fatimah explained that the rapid development of science, technology and industry has made human life easier. Yet, beyond easiness from these developments, adverse effects from these activities, especially from chemical industries are inevitable. Water and soil contamination and air pollution are impacts that require special attention. For instance, the report on Jakarta’s air quality indicated it as the worst in the world, which is a sensitive issue for a state as part of a global community.

“Chemical industries are often considered as the culprit for these negative impacts. However, it is undeniable that our activities are inseparable from chemicals. Basic human needs from clothing, food, housing and even communication devices are products of billions of chemical reactions. Chemistry is all around us,” Prof. Is Fatimah said.

Prof. Is Fatimah argued that in the history of chemical industry, productivity factor was more directed towards earning synthesis output as much as possible without considering the effects like residue, chemical waste and toxic effect at the end of production. On another aspect, energy consumption for some reactions is enormous.

“The number and variation of chemical product used in daily life has grown rapidly. To produce new materials, new compounds generated unknown or even detrimental effect on health,” she elaborated.

In addition to that, there are also Design for Energy Efficiency, the Use of Renewable Feedstocks, Reducing Derivatives, Catalysis, Design for Degradation, Real-Time Analysis for Pollution Prevention, and Inherently Safer Chemistry for Accident Prevention.

”Of all these twelve principles, as part of a wider scientific community in Indonesia, especially in UII and the Department of Chemistry, we made endeavors in developing Green Chemistry, through the Advanced Material for Energy and Environment (MEE) Research Laboratory,” she said. 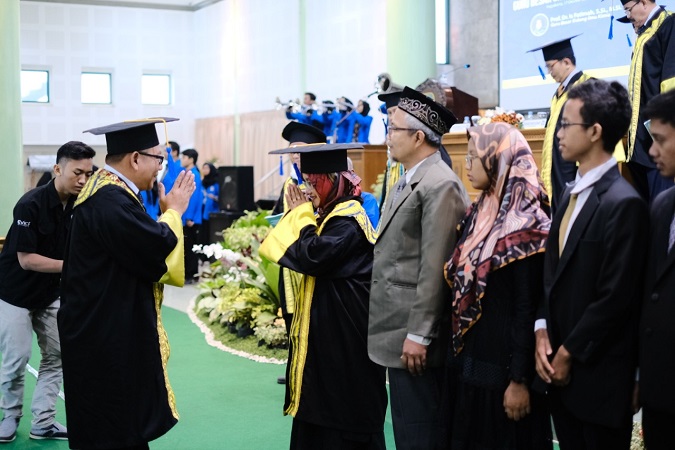 “The focus of our research is on the development of mineral-based and natural advanced material on catalysis preparation, adsorbent, and nanoparticles for applications in various reactions whether in the provision of essential chemicals, renewable energy and organic waste or coloring waste processing,” Prof. Is Fatimah added.

Furthermore, Prof. Is Fatimah stated that the success of clay-based material modification had supported many genuine environmental remedy technology, for example, the combination of clay material with Ti2O and ZnO in the form of ceramic membrane material, which can be used as disinfectant materials in drinking water. Photocatalysis mechanism supported by adsorption has the ability to eliminate bacterial cells in water for disinfection.

“Other than publications in reputable journal articles, four patents have been registered from research schemes developed by Advanced Material for Energy and Environment Research Group, Department of Chemistry, Faculty of Mathematics and Natural Sciences, UII,” she revealed.